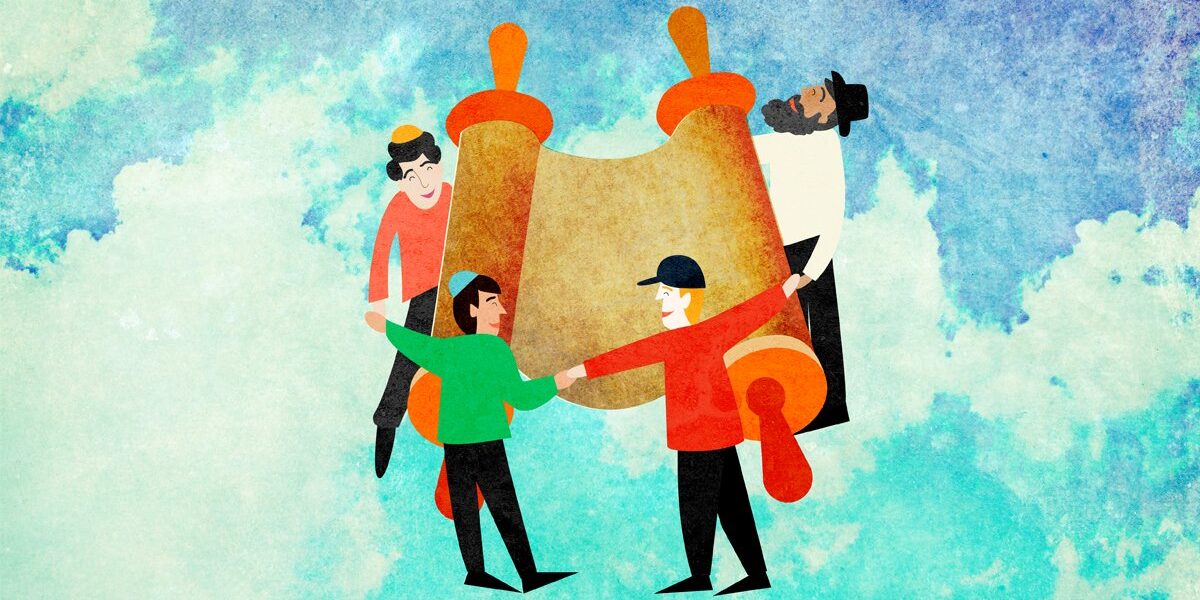 Simchat Torah is the holiday in which one reads the final parsha of Deuteronomy and the first parsha of Bereshit in one breath to emphasize the importance of Judaism’s continuity through the generous. This drash will enlighten everyone to our rich heritage.

Torah starts with the origin of the universe and the human race with the Creation of the world. The Jewish people NEVER change the words of the Torah; Never amend the text. Jews are involved in studying the Text with the Traditional Commentaries like Rashi as well as critical analysis, drawing out the meaning by applying other wisdoms, studying comparable texts and comprehending the ancient civilization which produced our Law, while making Judaism relevant to the generation of that or this age.

First Day: Light  Why Light? …Obviously it was Dark! G-d’s first creation was to bring LIGHT into our universe and world. That’s why Jews start their Sabbath and holidays at night.

Third Day: Sea, Land, and vegetation Keep in your thoughts water was created from the “{In The Beginning}”

Seventh Day: Shabbat: Day of Rest … Why did G-d create the Sabbath Day since he neither slumbers or sleeps? G-d created REST for Human beings and animals. Yes, animals of ranches and farms of Jews are given a day off from their labors. Cows, goats and other animals need to be milked and fed. Jews hire a non Jew to do these labors/ work and are paid after the Sabbath.

Humans are given “Freedom of Choice”, sin and punishment. Adam and Chava (Eve) eat of the forbidden fruit and are expelled from the Garden of Eden. One looks into the story as one looks at a child becoming aware of their surroundings and time of aging and moving out of the nest. (in a nutshell explanation)

Cain and Abel: G-d accepts Abel’s superior offering. Cain becomes jealous and kills his brother Abel. Cain learns punishment, which is to wander the earth. Okay, where were their parents? Abel’s brother cries out! The Almighty was watching this unfold. Why did He not stop the MURDER? Take a moment. There are many answers. Parents were elsewhere, no one knew about jealousy, to kill the meaning of another human being, and more. Abel’s blood represented the future generations that will never be born. Jealousy and envy are one of the worst behaviours because one loses focus on everything else. Murder is pure evil and the murderer can never repay for his actions to the family. If one accidentally kills a person, then it is horrible but not intended. *in the forest two men are chopping down trees, and an axe head separates and flies off the handle killing the other person. The Talmud states the person is to take care of that person’s family for life. Later more explanations of “an eye for an eye”, Judaism looks at the values not the actual verbatim of taking another person’s eye.

The concepts and values are that people are G-d’s partners. Literally the “Book of Instructions,” The Torah is meant to offer guidance for living a Godly life. A basic concept in this Torah portion is that G-d is the Creator. Creation is a continuous process, in which humans are partners with G-d. As such each of us strive to become a better person by acquiring those personal qualities which are considered “Godly.”

If you are joining Zoom Shabbat Services, our Sabbath candles will be kindled first because sundown is now early.