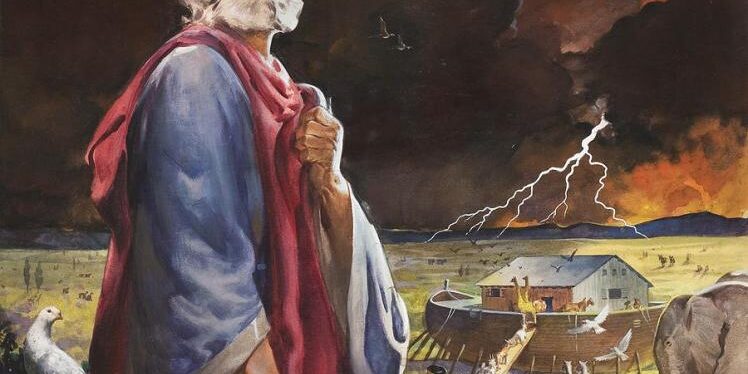 The Torah relates the tenth generation after Adam and Chava (Eve) is Noah. G-d decides to destroy the wicked world by means of a flood. G-d chooses Noah, a righteous man, and his family to be saved. Noah, his family, and the animals enter the ark and they are saved from the flood. The earth dries, and G-d promises, through the symbol of a rainbow, that the world will never again be destroyed in a flood. The genealogical tables of the seventy nations are presented. People build the Tower of Babel, whose construction is foiled by G-d by the confusion of their language.

There are many stories in this Sabbath Torah portion. There are many questions to ponder over, and many answers to the questions. Let’s drash (discuss)…

Being righteous is a virtue. In explaining why the Torah adds the apparently superfluous words “Noah was in his generations a righteous man,” some rabbis felt that this statement means Noah was not an especially unusual human being. For only, “in his generation” (of wickedness) did he appear righteous; had he lived in Abraham’s generation, he would not have been considered so righteous. Other rabbis took the opposite view. Since everyone around Noah was wicked, it was far more difficult for him to live a righteous life. This is to Noah’s credit (Talmud Sanhedrin 108a; Genesis Rabbah, 30:18). The latter message implies that no matter what the conduct of others may be, we can emulate Noah by rising above our environment rather than conforming to society.

If he was a righteous man, why did he not ask G-d can I bring my WHOLE family? (i.e. mom, dad, siblings etc.)

Why was Noah not concerned about saving humanity? Abraham and Moses did ask G-d to save human beings.

Why was the parsha stating he walked with G-d? [With G-d Noah walked.(Genesis 6:9)]

When we read the Abraham story G-d tells Avram, “Lekh L’kah” (Get Going). No directions at all. Avram becomes Avraham translated to “Father of a Nation”. Noah’s story tells us that he did not do anything without assistance, and questions on the “How To”. Both men spoke with G-d. They had opportunities to get all the knowledge they needed. Noah lived ten generations before Moses and the receiving of Torah. Yet the Israelites used the seven Noahide laws because it was centuries before the Jewish people received the Torah,(based on rabbinic interpretation of Genesis 9:1-6. In all, there are six negative laws and one positive one):

Not to deny G-d(through idolatry), Not to blaspheme G-d, Not to murder, Not to engage in incestuous or adulterous relationships, Not to steal, Not to eat the limb from living animals, and to set up courts to ensure obedience to the other six laws.(Talmud Sanhedrin 56a).

The Haftarah of Noah is taken from the Book of Isaiah. Isaiah speaks to the Jews exiled in Babylon after the destruction of the Jerusalem Temple in 586 B.C.E. The people are obviously shocked and in deep despair, and Isaiah attempts to comfort them.

The Israelites are reminded that G-d’s kindness will never depart from them, and that all weapons that may be directed at them will never prosper. The Haftarah’s concluding theme is that the return to Zion should also be a return to G-d. It is a call to rich and poor alike to participate in the blessings of the new era, by coming to the source from which knowledge of duty springs – namely, the word of G-d.

A few interesting concepts from the Noah story:

Other sources from mythology, pagan ideology such as Gilgamesh had a “Flood Story”, however Judaism does not believe that various deities were fighting to cause the waters to overflow. Judaism shows that G-d created the flood to cleanse the world he created. He really wanted to destroy all life that he created, however G-d found Noah was righteous. When one sees a rainbow after a horrific storm, it is G-d remembering that He will not bring another “Flood” to destroy all living things. The Bow in ancient times symbolized war, and when a Bow is turned backwards it denotes peace! There is also a special prayer one recites when seeing a rainbow.