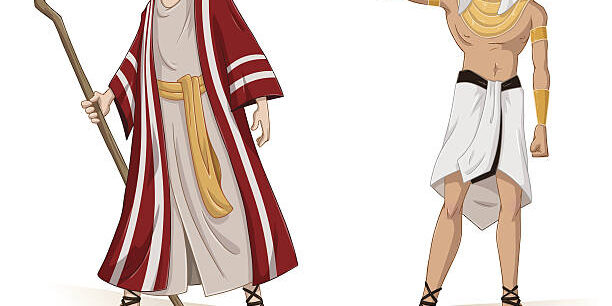 The Torah continues this Sabbath with G-d telling Moses to go before Pharaoh and ask him to let the Israelites leave Egypt. Moses responds that Pharaoh will not listen and apologetically explains that, because of his speech impediment, he is not the right person to represent the people. G-d answers that Moses’ brother Aaron will accompany him as spokesman. Aaron and Moses appear before Pharaoh to request freedom for the Israelites. Pharaoh refuses, and seven of the Ten Plagues are set upon Egypt. Pharaoh remains stubborn and will not let the Israelites go.

Concepts and values from the Torah and this is one about the “Hardening of the heart.” The rabbis point out that the phrase “hardening of the heart” occurs nineteen times in the story of Pharaoh and the Israelites. It is recorded ten times that Pharaoh hardened his heart, and nine times that G-d caused Pharaoh’s stubbornness. Several questions have often been asked: In the name of fair play, how could a just G-d harden Pharaoh’s heart and then, every time he changed his mind, punish him with a new plague? How can G-d make it impossible for a person to obey and then punish him for disobeying? The sages explain that at first Pharaoh’s stubbornness caused his vacillation. Eventually, however, Pharaoh was so conditioned by his stubbornness that it seemed as if G-d Himself had caused it. Judaism affirms the principle of free will. We are all the masters of our own spirits. “One evil deed leads to another” (Pirkei Avot 4:2/ Sayings from our Forefathers chapter and verse). If we choose to do evil, it will, like Pharaoh, ultimately enslave us. Conversely, one good deed leads to another, and we are much more liberated from slavery.

The Haftarah connection to the Torah portion is Egypt, a country that Israel could not depend on either in times of Moses or in the time of Ezeikel. Egypt, the house of bondage and oppression for Israel in the days of its youth, was again the enemy during the last years of the Jewish state. Today, Medinat Ysrael has a peace accord with the Jewish people as does Jordan along with other Arab countries.

If one looks at the ideology of any racial extremists, with their minds so hardened by beliefs of hatred toward anyone that has a different stance from their points of view, then one can realize how Pharaoh must have been. When one hears vile rhetoric from people that are not educated to comprehend the histories or factual evidence presented in conversation, they tend to lash out at any opposing viewpoints. Such was Pharaoh with Moses and Aaron expressing the desires to have freedom for the Israelites. Keep in mind the Pharaoh in the story of Joseph had an ancestral connection to the Jewish people, while 400 years later the Pharaoh of Moses did not know the history of the Egyptians and Joseph. The old adage, “If one forgets their history, they may repeat it!”

May we have the compassion and patience to listen to all points of views. Then common viewpoints will appear and people will one day have kindness and peace.