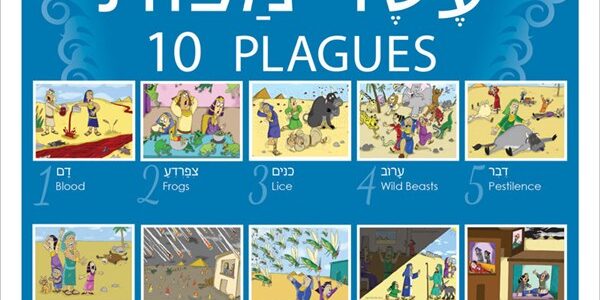 The Torah portion continues with Moses and Aaron pleading with Pharaoh to let the Israelites go free. Pharaoh continues to refuse, and the Egyptians are punished with the last three of the Ten Plagues – locusts, darkness, and the death of their firstborn.

Pharaoh lets the Israelites go. The Israelites proclaim that each year, on the evening of the fourteenth day of the first month, a festival lasting seven days will be observed to recall their freedom from Egyptian bondage. *Jews living in the diaspora observe for eight days. Matzah will be eaten for seven days. * Eight days for Jews outside Israel.

There are various laws and minhagim (customs) about Passover. Some are the removal of leaven and the how to’s of observance for Passover. The Sanctification of the first born, telling your child the story of Exodus from Egypt and Phylacteries/Tefillin. Tefillin also reminds one of the Exodus story, holidays and Shabbat and the covenant between G-d and the Jewish people.

Another concept is the “Telling your child the story of Exodus from Egypt.”

Most of you may notice it stated to your son, and not daughter or children. Keep in mind the Torah is written in the Hebrew masculine not feminine form. Today, some Haggadahs have four children, not four sons. There is also a total Female Haggadah for a Women’s Seder. This Women’s seder has an orange on the seder plate. The story was told that a daughter of a rabbi asked a question of why a woman can not become a rabbi. The rabbi told her it would be like an orange on a seder plate. Whatever Haggadah you choose to use, just enjoy the telling of the Jewish people’s Freedom from Egyptian Bondage of slavery. It was 400 years after the death of Joseph that Moses led the Israelites to the Promised Land.

The Haftarah has the connection with the Torah portion because both are about Egypt, a land which could not be depended on either in Moses’ time or in Jeremiah’s.

The last Shabbat Haftarah was from Ezekiel and this Sabbath we read one of Jeremiah’s last messages from his days in Jerusalem. He concludes with words of hope for Israel, reminding the people not to fear, because G-d will always be with them.

May this Sabbath bring everyone health, happiness and Shalom.

Please inform me or Ellen Nathan if you are ill or need prayers to be recited.