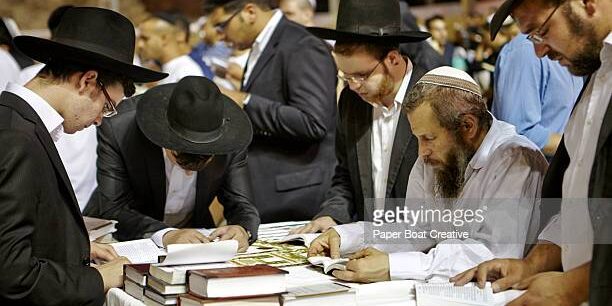 Did you wonder how and why Jewish people need ten people to have a minyan (to pray)?

The spies were twelve in number, which represented the tribes. They went into Canaan to scout the land for Moses. The spies reported back to Moses that the Canaanites who inhabited the land were so large and powerful that they felt, in comparison, like grasshoppers. It is not clear whether their report was credible or only a figment of their imagination. In any event, the Torah appears to be warning that if we look upon ourselves as small and insignificant, others will take us precisely at our own self evaluation.

The reason why “TEN”…for centuries and even today many synagogues need 10 MEN, however many synagogues today include women!!! The twelve spies came back with their reports, but only 2 reported that the land could be conquered. Can you guess at least one name?

He was from the tribe of Ephraim, Hosea son of Nun and from the tribe of Judah, Caleb son of Jephunneh. Moses changed Hosea’s name because he was a brave fighter, wise and a good advisor…JOSHUA (who would be the leader of the Israelites after the death of Moses).

The ten scouts would represent the community, and synagogues would need men to worship.

The Haftarah  tells the story of the two men sent by Joshua to Jericho. The purpose of this venture was to determine the morale of the Canaanites. The two spies are eventually sheltered in the home of Rachab, a prostitute, who assures them that the Israelites will be able to conquer the country. She asks the spies to save her and her family when Israel is victorious, and they agree to do so. The spies tell her to hang something out of her window from her apartment in the wall…Do you know what she put outside her window? A long red cloth. Ancient times and even modern times the red light districts were known for prostitution.

Joshua and the Israelites were victorious.

G-d is both in the heavens and on earth. An act of kindness often begets another.

Remember people may speak beautifully, however it is their moral and ethical actions that matter.

This Shabbat we will hear the Supreme Court’s decision on Religious Freedom. As a Jews it is scary to think that in America religious freedom would ever come to be restricted or practices ended due to safety concerns. AS some of you know I had the honor of attending an Interfaith Luncheon with Governor Spencer Cox and First Lady Abby Cox along with 75 other clergies. The governor spoke of where has G-d gone in our society? He also mentioned how fewer people are attending services in the diverse faiths in Utah. Another issue was the shutdowns throughout our country, however Governor Cox only closed the schools for two months. A few states did the same, while others remained closed for almost two years. He felt the decision to open helped the learning process of our children, while others will be falling behind and need to catch up.

I was honored to give the opening prayer and I mentioned how even though covid we were blessed with technology. Our congregation and almost all other faith leaders held services during the closures. Today, HYBRID services are being used. I mentioned how Senator Mike Lee visited St. George to hear from the Faith leaders about their challenges of covid. I told the Senator that the Jewish people fought for religious freedom from being Hellenized by the Greeks and the Jewish people won their fight!

I informed the Senator if I get arrested for holding services in person, you better bail me out!

I repeated this at the Governor’s Luncheon to the laughter and shaking heads of agreement that the Faith Leaders will not close their Houses of Worship. It is a sacred and safe place for all individuals during dark and challenging times.

As always, time passes and people adapt to the changes. Jewish people are unfortunate or fortunate they were thrown out of countries, persecuted or hid their identities (Inquisition and The Holocaust), and they countinued to practice their faith and kept Judaism ALIVE!

Let us pray with Ruach/Spirit this Sabbath when we recite our prayers. The Lord will find compassion, healing and extra loving kindness for each of us. There is Power of Prayer and ALL FAITH LEADERS AGREED WITH ME!