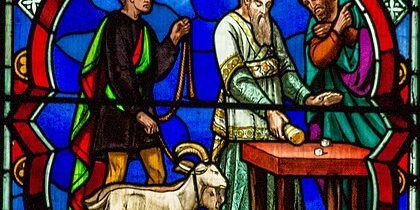 Wednesday night, April 27 is the Remembrance of Yom HaShoah usually Jews light a yellow memorial candle (Yahrzeit candle will be fine) for all the innocent Jewish Holocaust victims slaughtered by the German Nazis.

Elie Wiesel stated that if one forgets to remember them, it is as you killed them again.

NEVER BE SILENT AND NEVER FORGET!

May their memories be for a blessing.

The Torah portion from Acharei Mot contains the verses recalling the deaths of Aaron’s sons, Nadav and Avihu. Next it describes the rituals for the sin offerings that Aaron is to present in the sanctuary for himself and the people. Also, the laws regarding sexual relations are presented.

The Torah concept of Azazel/scapegoat is in this parsha. When Aaron enters the inner sanctuary, he is told to bring sin offerings for himself and his household, and for the people of Israel. For himself, he is to bring a bull. For the people, two male goats. Standing at the sanctuary entrance, he is to mark one of the goats “for G-d” and the other “for the Azazel” as the scapegoat for the mistakes and errors the people have committed. When the ritual is completed, the male goat marked “for Azazel” is brought to Aaron. Aaron places his hands upon it and confesses all the wrongdoings of the people. The goat is sent off into the wilderness.

While there are many different interpretations of the ritual of scapegoat, Maimonides states that the scapegoat is an active allegory meant to make the sinner understand that his sins will inevitably lead him to a wasteland. Abarbanel sees the two goats as a reminder of brothers Esau and Jacob. Esau the hunter in the wilderness, while Jacob’s life was marked “for G-d.”