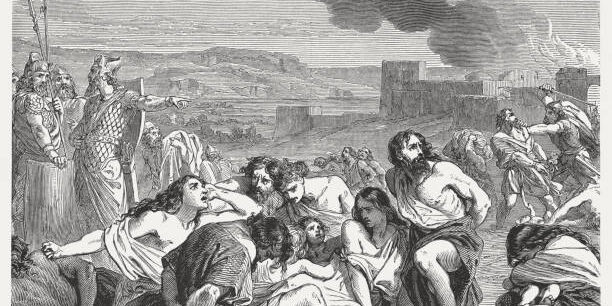 The Torah portion Balak has the non-Jewish king Balak of Moab who sent Balaam to put a curse on the Israelites. Balaam’s prophecies are listed, Balak’s anger at Balaam, Balaam blesses the children of Israel and Israel practices the cult of Baal of Peor.

Sinnat Chinam: curseless hatred…The plot of the Moabites against the children of Israel is just one more example of hatred for no just cause. Jewish tradition always denounced hatred. ”What is harmful to you, do not do to others,” state the rabbis (Talmud Shabbat 31a). Hatred without any real cause was considered the most vicious form, and the rabbis denounced it in extreme terms. The Talmud states that causeless hatred is as wicked as idolatry, adultery, and murder combined.

Curses among biblical peoples, a curse was more than an expressed wish for evil, it was considered a method of translating such harmful efforts into reality. Curses were usually (though not always) pronounced in the name of a god or demon. Many Near Eastern peoples relied on professional prophets or sorcerers to curse their enemies in battle. In our story, even G-d viewed the intent with alarm.

So … Balaam’s blessing was, “How good are your tents, O Jacob, your dwelling-places, O Israel.” This text is part of the opening prayer of the daily morning service, for which it provides a wonderful psychological warmup! Hebrew Mah Tovu!

Let us try to comprehend why AntiSemitism has grown throughout the world, and AntiSemites spew their hateful rhetoric or take to violence against our synagogues and people, while Jewish people in powerful positions do not speak up or condemn the vile rhetoric or attacks. Some of our people take action by condemning this horrific behaviour, and some do not.

Today, the hatred toward the Jews and other groups of people has become commonplace, to which everyone should be appalled. Yet, some people become desensitized to the vile rhetoric and violence, while some remain silent and numb.

to be studied by scholars as they struggle to find the definitive answer of the question, “Why did this happen to the Jewish people?”

This is why I continue to teach AntiSemitism, racism and the Holocaust. People should never be complacent, indifferent or remain silent when hatred or violent actions toward Jews or other people or synagogues or other houses of worship happen. It emboldens the AntiSemites and their evil actions to continue, their bad hateful behaviour spewing more lies and false facts. It is up to each generation to teach children, to remember what happened from 1933 – 1945 to

NEVER BE SILENT! AND NEVER FORGET!

People in our community are trying to bring light into the darkness!

July 4th there will be an event of “United We Pledge”, “A Prayer for Religious Freedom”, and to celebrate our shared responsibility and allegiance to traditional American values of Freedom, Family and Faith.

I hope some of you may attend.